Drunkard's Path deserves its name. Sewing up these squares was a challenge. Working on the bias requires some different techniques but these were something else!

First consider the concave and convex curves that are sewn together: bias, bias, and more bias that can stretch no matter how accomplished a sewer you are. Even cutting them out can cause problems. I found a wonderful tool at the Fat Quarter Shop: the Non-Slip Round Up Tool to cut the pieces with a rotary cutter. It has many uses! And it's extremely handy for these Drunkard's Path squares. 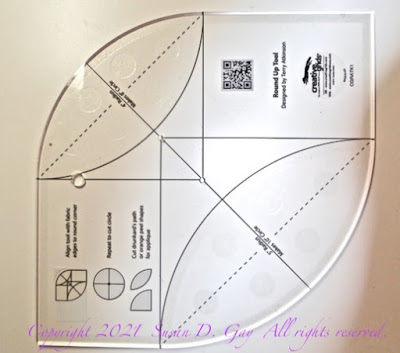 I preferred to pin the curves despite some of the YouTube videos showing sewing with no pins at all. After folding both pieces in half and matching the centers, I first pinned the center, then ends together, and filled in between. This was the easiest for me because the raw edges fight each other and try to creep up or down. But I still ended up with wonky squares..... 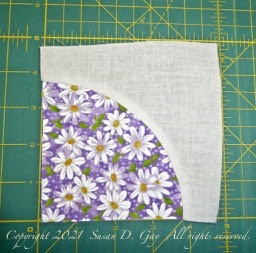 Even with c careful pressing.......sigh....
Now I understand the original sewer of the vintage Drunkard's Path wonky squares! But what I did (that she probably didn't do) was to square each individual square up to be a perfect square. Each side had to be evaluated and maybe trimmed. Takes time but so worth it!! 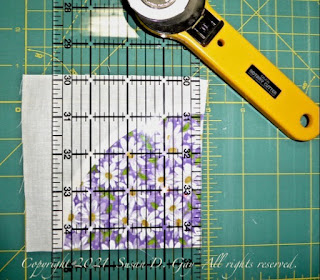 And it makes putting it all together so much easier! 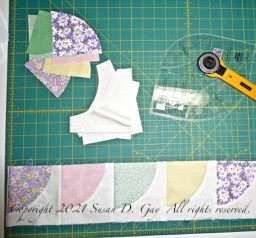 I will put these around the quilt so I have quite a few to do but the tool makes it go faster. I'm using all six fabrics to tie the design and colors together. But first I'll put two small borders around the vintage squares to prepare for this Drunkard's Path border. I think this quilt, though unusual in design, will be very pretty when completed!
Posted by Berryhill Heirlooms at 12:08:00 PM

Email ThisBlogThis!Share to TwitterShare to FacebookShare to Pinterest
Labels: Bias, Drunkard's Path, Non-Slip Round Up Tool 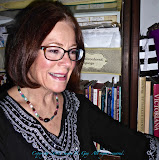 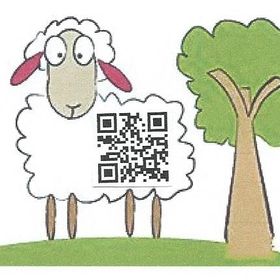